Every six months, I am always intrigued to see London Fashion Week taking place just down the road from my office.  Different seasons mean different trends with some styles remaining popular for multiple seasons whereas others are one season fads.  It’s easy to think that the preoccupation with the latest fashion trend is a modern day phenomenon but people have been following fashion trends for centuries.  I am always reminded of this when I look at the crinoline lady tea sets in our vintage china collection.

These sets usually have a gold pattern around the edge with space in the middle for a picture of a young woman, often in a country garden, wearing a lavish dress supported by a crinoline.

Crinolines originally referred to stiffened petticoat material which was worn under a skirt or dress to puff it out.  However, the material didn’t work very well and dresses lost their voluminous appearance soon after they were worn.  This led to the invention of the ‘cage crinoline’ around the middle of the nineteenth century, which consisted of steel hoops connected with vertical tapes hung from the waist.  They provided a flexible but largely rigid frame to provide much desired skirt support and they were a huge success.

Women liked that they were lightweight and that they no longer needed to wash and iron the many petticoats that they’d worn previously under their skirts.  However, crinolines also had drawbacks, some of which must have been quite amusing to witness.  Because they were so lightweight, they were prone to being blown above the waist by the wind.  Many women started wearing big pantaloon-type shorts to preserve their modesty.

The other amusing drawback was that sitting down could be difficult.  Apparently if you weren’t careful to place the hoops in the correct place while attempting to sit, the whole thing could end up around your shoulders!  I like to imagine groups of ladies stifling their laughter as they each attempted to sit down at an afternoon gathering. 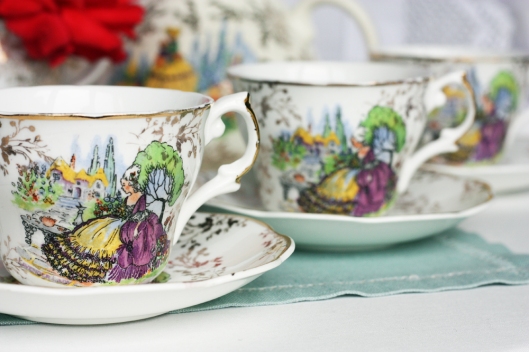 In the pictures depicting crinoline ladies on vintage china, all the ladies look suitably preened and neat, and I imagine that they had all mastered the art of sitting down and undertaking other activities gracefully while wearing their great crinoline dresses.

Like many trends today, crinolines fell out of favour quite quickly, presumably because women realised just how impractical they were!  Even though I doubt that I’ll be seeing crinolines featuring in London Fashion Week anytime soon, at least they live on in the picturesque scenes on vintage English china tea sets.

2 responses to “Crinoline ladies: the fashionistas of vintage china”