When is a cake not a cake?  When it’s a Welsh cake!  I love Welsh cakes although they don’t look much like cakes.  As Denise from the Welsh Baker says, they’re more like a combination of a cookie, scone and pancake.  They have the shape of a cookie but a more similar texture to a scone, and they’re cooked like pancakes, on a griddle rather than baked in the oven.

Despite loving Welsh cakes since I was a little girl, I made them for the first time only a few weeks ago.  I was thinking of making them for St David’s Day, which was last Saturday (for non-Welshies, St David was the patron saint of Wales) and wanted to do a trial run.

I used this BBC Food recipe and it was quick to mix up a batch of the cake batter.  The most difficult aspect was cooking them.  I don’t have a flat griddle pan so I used a small frying pan which allowed me to cook four cakes at one time.  As it was so small it was difficult to turn them over, so they probably weren’t as evenly cooked as they could have been.  But they were still tasty and didn’t last long.  The pile of warm cakes kept getting smaller every time one of us went into the kitchen!

After all that, I decided not to make Welsh cakes on St David’s Day and opted instead for some Bara Brith, which is Welsh for ‘speckled bread’.  It’s a traditional Welsh fruit cake where the fruit is soaked overnight in tea.  Apparently there is a version made with yeast that is more bread-like but I’ve only ever tried the ‘cake’ version made with self-raising flour.  Like Welsh cakes, the ingredients are simple and are likely to be in your kitchen cupboard.  You just need to be a little more prepared with bara brith and remember to soak the fruit the night before.  Like Welsh cakes, the cake can either be eaten on its own, or with some butter and jam or even maybe maple syrup or honey.

I used a recipe which my mum and I have been using for years.  I’m not sure if Nancy, my gran, used exactly the same one but I like to call it ‘Nancy’s favourite bara brith’ anyway. 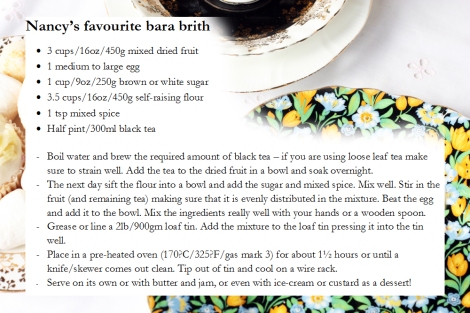 Let me know if you try making Welsh cakes or bara brith.  I’d love to hear what you think!