As much as I like ginger teas, another type of tea in my top ten is mint tea.  Years ago before herbal teas became popular, I was introduced to mint tea, like I’m sure many other people in the UK were, through Twining’s peppermint. While at university, I started to discover different types of mint, including a particularly bright blue-green-coloured spearmint blend from Dr Stuart teas (which I must try to find again!) and the freshest Moroccan mint tea I have ever tasted in a rooftop cafe in Paris.

As you can imagine, I was pleased to find that Clipper teas has created a new ‘Occasions’ range of teas, one of which is called After Dinner Mints.  Being a lover of all things retro, I was immediately transported back to my childhood where After Eights were a staple part of any dinner party (not sure if they made it out of the UK, in case not, they are thin sandwiches of chocolate surrounding a soft mint fondant filling). 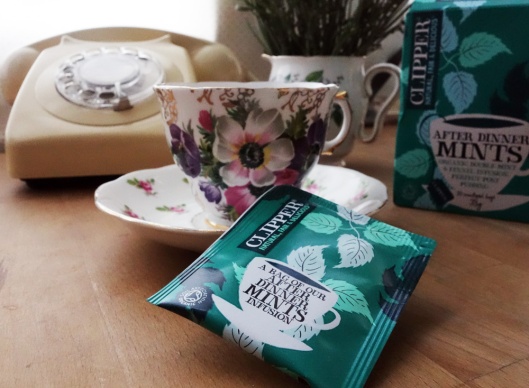 Anyway back to After Dinner Mints.  My first cup turned a reassuring blue-green colour, which made me think that I was in for a flavoursome drink.  It has a smooth mint flavour with a surprisingly sweet tinge, without too much of a zingy peppermint kick.  I went back to look at the ingredients because I remembered that as well as peppermint and spearmint, it also contains fennel (something that made me hesitate from buying as I’m not a huge aniseed-flavour fan). However, on reading the ingredient list, I discovered that as well as fennel, it also contains my old favourite, ginger!  Ginger and fennel aren’t flavours I’d immediately put together but they work really well in this tea.  So well in fact that I’m already almost half-way through my first box.  Despite it being ideal as an after dinner digestif, I also think it’s a great way to wake up and I’ve been drinking it most mornings for the past week to help me focus on the day ahead.  Now all I have to do it decide which infusion to try next…

4 responses to “Taste-tea Tuesday: After Dinner Mints by Clipper teas”