I’ve been looking back at some of the photographs that I took when I first started Nancy’s Tea Shop.  I love looking at photos.  Before the digital era, I used to eagerly await picking up a new set from the developers. I’d frame a few and put the rest in an album.  Often I’d find my albums when I was tidying up or looking for something and the next thing I’d know an hour would have passed and I’d have worked my way through all the albums getting lost in my memories.  These days, I sometimes do this when I’m looking for something on my portable hard drive, although I never get as absorbed as I used to with my albums – probably because I always have one eye on Etsy or Facebook! 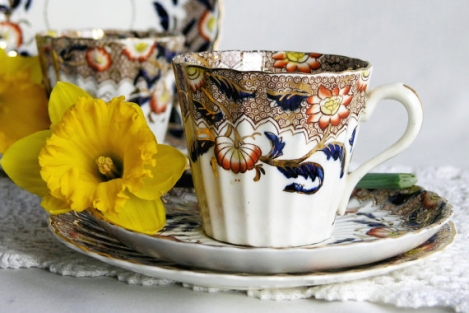 So back to my photos of vintage china, I thought I’d share some pictures of not English but Welsh china.  Being from Wales, I was interested to learn that not all tea sets were made in Staffordshire.  At the time that potteries were switching from hand craftsmanship to mass production, Welsh potteries were making affordable but pretty china tea sets which were accessible to more people than ever before.

Tea sets such as the ones in the pictures were known in their native Wales as Swansea Cottage, but when Welsh people emigrated to North America in the 1800s taking their china with them, it became known as the more theatrical, Gaudy Welsh, presumably due to the bright decorative colours that were used. Most of these pieces of china seem to date from between 1820 and 1860 although Gaudy Welsh was still made into the early twentieth century.  The ones in the pictures have the backstamp W & B and their pattern and design reflects a Japanese “Imari” influence. When I first found them, I actually thought they might have been made in Japan.  In keeping with the story, these tea sets went on their own voyage across the Atlantic – one to California and one to Massachusetts.

It wasn’t just people emigrating to North America who took their tea china with them. Many Welsh people moving further afield to Australia and New Zealand would have included some pieces of Gaudy Welsh in their trunks.  My great-grandmother (with whom I share my name) made the long voyage to New Zealand with my baby grandmother, Nancy, during the early 1900s. Her family would certainly have given her some china to take with her and I like to think that some of it would have been Gaudy Welsh.

I’d love to hear about your family china collections!